We will focus on the changes and summarize the rules in the same format as in our previous publications.

Starting on July 5, 2020, the CEWS program will no longer offer a fixed 75% wage subsidy to “eligible employers” up to a maximum of $847 per week per employee. Under the new rules, the amount of the wage subsidy will be calculated based on an eligible employer’s revenue decline. There are significant changes in the proposed legislation.

General changes as per the Department of Finance

Base subsidy for all employers impacted by the crisis

Effective July 5, 2020, the base CEWS would be a specified rate, applied to the amount of remuneration paid to the employee for the eligibility period, on remuneration of up to $1,129 per week. The rate of the base CEWS would now vary depending on the level of revenue decline, and its application would be extended to employers with a revenue decline of less than 30%. This expansion would mean that all eligible employers with any revenue decline would now qualify for CEWS support.

The specified rate would be determined based on the change in an eligible employer’s monthly revenues.

Rate structure of the base CEWS 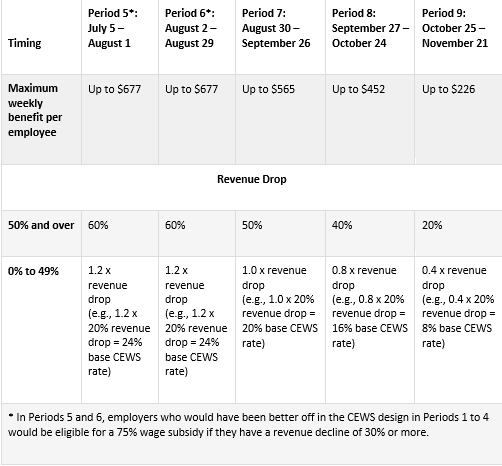 Top-up subsidy for the most adversely affected employers 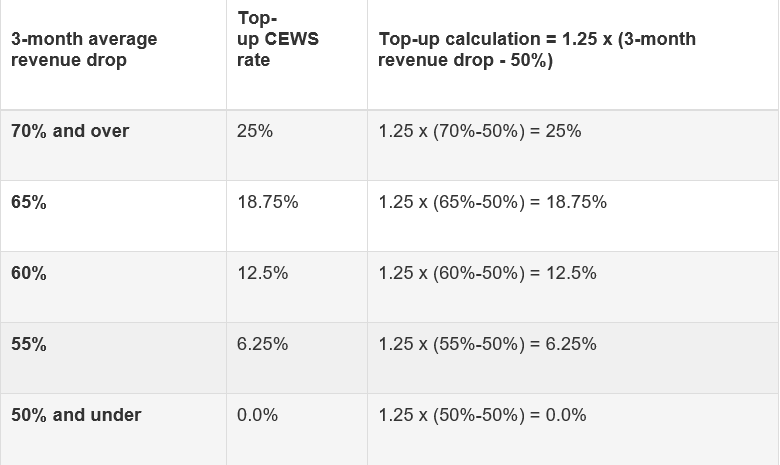 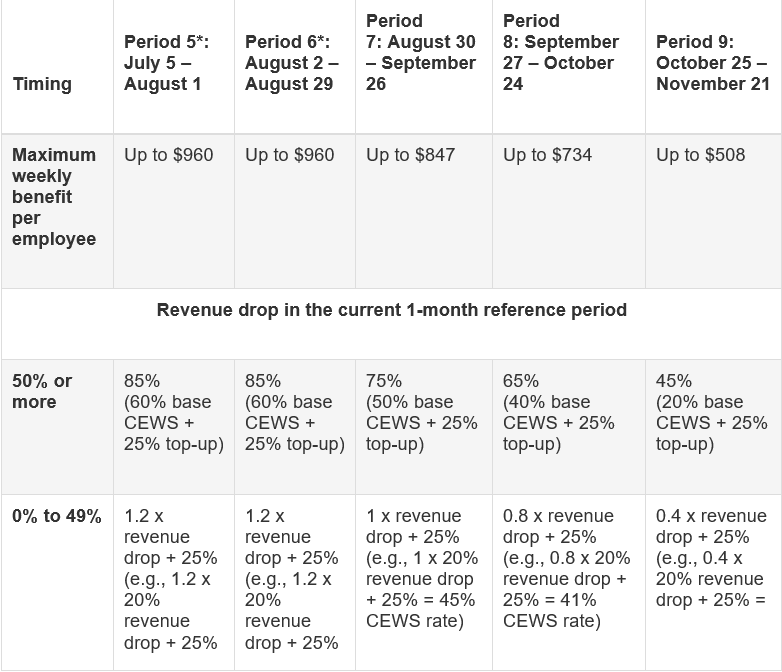 * In Periods 5 and 6, employers who would have been better off in the CEWS design in Periods 1 to 4 would be eligible for a 75% wage subsidy if they have a revenue decline of 30% or more.

For Periods 5 and 6, the subsidy calculation for a furloughed employee would remain the same as for Periods 1 to 4. It would be the greater of:

Beginning in Period 7, CEWS support for furloughed employees would be adjusted to align with the benefits provided through the Canada Emergency Response Benefit (CERB) and/or Employment Insurance (EI). This would ensure equitable treatment of employees on furlough between both programs, provide greater clarity to workers as to their compensation as compared to a changing subsidy rate based on their employer’s revenue in a given month and, when combined with draft legislative changes to the interaction with the CERB (i.e., the elimination of the 14-days rule, as discussed below), make it easier to transition employees on to CEWS so that they are reconnected with their employer.

For Period 5 and subsequent periods, the CEWS for furloughed employees would be available to eligible employers that qualify for either the base rate or the top-up for active employees in the relevant period.

No changes are proposed to the definition of eligible remuneration. Eligible remuneration may include salary, wages, and other remuneration like taxable benefits. These are amounts for which employers would generally be required to withhold or deduct amounts to remit to the Receiver General on account of the employee’s income tax obligation. However, it does not include severance pay, or items such as stock option benefits or the personal use of a corporate vehicle.

For active arm’s-length employees, the amount of remuneration would be based solely on actual remuneration paid for the eligibility period, without reference to the pre-crisis remuneration concept used for earlier CEWS periods.

A modified special rule would apply to active employees that do not deal at arm’s length with the employer. For Period 5 and subsequent periods, the wage subsidy for such employees would be based on the employee’s weekly eligible remuneration or pre-crisis remuneration, whichever is less, up to a maximum of $1,129. The subsidy would only be available in respect of non-arm’s-length employees that were employed prior to March 16, 2020.

Reference Periods for the Drop-in-Revenues Test

For the purpose of the base CEWS, eligibility would generally be determined by the change in an eligible employer’s monthly revenues, year-over-year, for the applicable calendar month. The table below outlines each claiming period and the relevant period for determining an eligible employer’s change in revenue. For Period 5 and all subsequent periods, an eligible employer would be able to use the greater of its percentage revenue decline in the current period and that in the previous period for the purpose of determining its qualification for the base CEWS and its base CEWS rate in the current period. This would provide certainty and be a continuation of the rules for Periods 1 to 4 that allowed an employer that met the revenue test in one period to automatically qualify for the following period.

Reference periods for the base CEWS 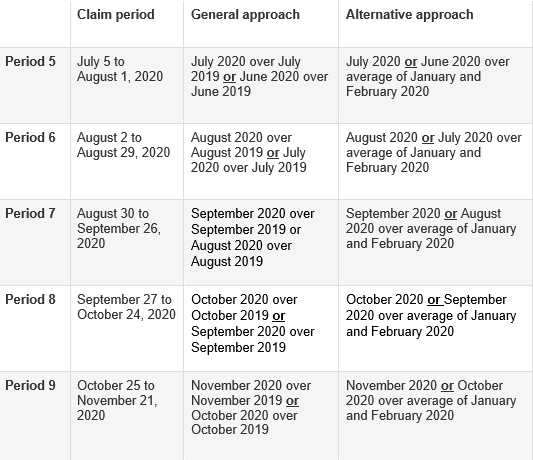 Reference periods for the top-up CEWS 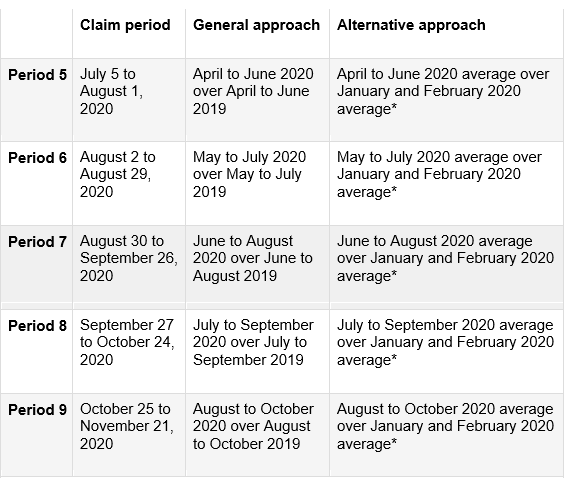 * The calculation would equal the average monthly revenue over the 3 months of the reference period divided by the average revenue for the months of January and February 2020.

The government has shared draft legislative proposals to make the changes to the CEWS. These proposed changes, which would generally apply as of March 15, 2020, include:

The subsidy is fully taxable. From a cash perspective, the tax cost of obtaining the subsidy will not be due until the eligible employer’s tax filing due date. For a CCPC with a December 31, 2020 year end, the taxes on the subsidy would not be due until March 31, 2021. In Ontario, the tax due would be 12.2% if eligible for the small business deduction or 26.5% if not eligible for the small business deduction.

If the employer does not meet the eligibility requirements and has incorrectly received the subsidy, the employer would be required to repay amounts received under the Canada Emergency Wage Subsidy.

Penalties may apply in cases of fraudulent claims.

Employers that engage in artificial transactions to reduce revenue for the purpose of claiming the CEWS would be subject to a penalty equal to 25 per cent of the value of the subsidy claimed, in addition to the requirement to repay in full the subsidy that was improperly claimed.

Segal GCSE LLP is available to assist you through the process once the government finalizes the methodology and the web access.